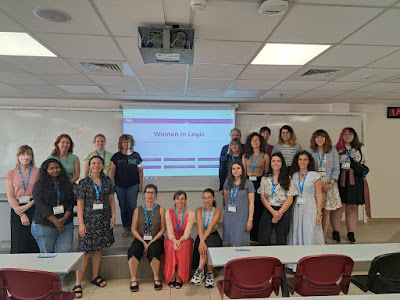 Our workshop Women in Logic (WiL) 2022 at FLoC (Federated Logic Conference) in Haifa, Israel was a big success. This was the first time ever that I was not present at Women in Logic, and I confess that it felt very strange (and sad) not to be there.
This was the 6th year of the workshop and I had promised myself that I was going to do three workshops and hopefully by then the workshop would be established, and I could withdraw gracefully. I was not counting on the COVID pandemic, when I made these optimistic plans. And in any case, three years is not nearly enough to really establish something like a workshop that you only want to stop doing when there is gender equality in our community.
But sure enough, the workshop is very much established by now.  I am extremely grateful to all, for the collective effort that it has taken. The organizers this year (Sandra Alves, Sandra Kiefer and Daniele Nantes) and the previous years' organizers have been wonderful, and I'm sure will continue to do a fantastic work. Our community is growing--slowly, but surely. Our Steering Committee has been consolidated, following the "by laws" decided earlier on. This year in March we launched the Women in Logic website. We keep inventing new ways of fighting gender discrimination and also new ways of having some fun, while doing it.
In July, the WiL workshop at FLoC had the biggest number of registered participants in all FSCD workshops. As usual we had two invited speakers: Dana Fisman (Ben-Gurion University of the Negev)
and Delia Kesner (Universite Paris Cite and Institut Universitaire de France).
We also had nine contributed talks (you can find titles and abstracts in the program).
And all presenters were live in Haifa, as Amy Felty remarked. 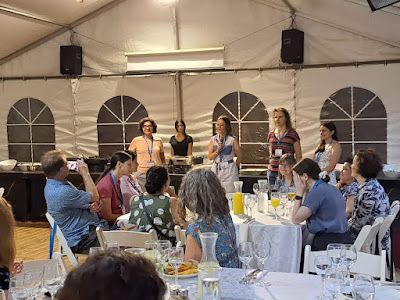 We also had a special dinner, actually the dinner was for all women at FLoC, not only the ones at WiL, where the photo above was taken. WiL was asked to organize The first Women@FLoC dinner, supported by both Microsoft
and FLoC. We want to thank very much Nikolaj Bjorner from Microsoft Research,
who helped to set this support for us!
The dinner was opened by Alexandra Silva (FLoC general chair), followed by a short Q&A
with three women representatives of different areas of FLoC:
Ilina Stoilkovska (researcher, PrimeVideo), Norine Coenen (Ph.D. student,  CISPA
Helmholtz Center for Information Security),  and Amal Ahmed
(Professor, Northeastern University).
We thank all of them for helping us make clear that theoretical computer science
also needs gender equality and parity. The science is uncontroversial:  diversity
and inclusion make science, academia and industry better, measurably so.
Sandra Kiefer, a joint organizer of the last three Women in Logic workshops,
was invited to give a talk about "Women in Logic" in the Diversity & Inclusion session
at the 19th International Conference on Principles of Knowledge Representation and
Reasoning (KR2022). More details about the WiL meeting will appear soon in the report
produced by the organizers, Sandra Alves, Sandra Kiefer and Daniele Nantes.
Join me in thanking them for the hard work they put into making our workshop a reality!
And yes, stay tuned for the Women in Logic 2023!

Posted by Valeria at 9:16 PM No comments: