Woohoo, you and the husband are invited to a prestigious research centre?

This is one of the histories that has a kind of happy ending, but only kind of as it seems that the scientific research center policies are still in flux. Judge for yourself.  My job is just to collect the histories, with or without name, as  people prefer it.

This story is described by an open letter in Prof Agricola's website. Professor Agricola is now President of the German Mathematics Association (DMV) and her mathematical career is not in danger.  She has the following Open Letter on her website https://www.mathematik.uni-marburg.de/~agricola/ewm-open-letter.html. I will copy  it below, but you should read it in the link, where you can find this picture. 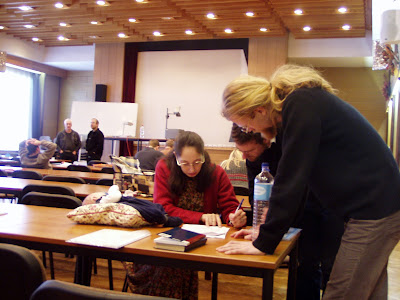 This is Prof Agricola's son, aged three months, sleeping in the desk, while she does maths with her students. Sweet! Now you may think 2014 in Prof Agricola's letter and think this is pre-historic (some people do!), but then you should check Viviane Pons blog post from 2019 http://openpyviv.com/2019/06/08/baby-vs-cirm/, which is again a similar story.

Just one extract from Pons' blog post, that again is better written than I can provide and very much worth your time reading:

"But things changed. They changed because women and allies did not give up. There were some open letters and petitions circulating. There were some pressure being made. At a time where supporting women in math was becoming “trendy”, the policy started to be bad publicity. When CIRM would brag about their actions for supporting women (like women speaker requirements, women events, etc), there would be people to remind them of their policy. I actually know one of these women. She is a senior researcher very much involved in defending women in mathematics globally. Once at a board meeting for conference centers, she did say to them: “these things are nice of course, but what about accepting children and nursing mothers inside your facility? This is your biggest issue!”. She told me the answer she got from the CIRM at the time was along the line of “What? This has nothing to do with that! This is a legal issue we cannot do anything about”. Well, they could, and at some point, they did."

For me, my first child also went to her first conference when she was three months old.  And we cooked dinner for something like fifteen people during the meeting together. We had babysitters that we took with us to funny places, we did the old routine of "I just talked, give me the baby so that you can go talk" (when both of us were teaching), I gave talks holding on to the baby and pacing up and down to make her go back to sleep, etc. I like what I do and I wasn't going to let my children stop me from doing it.

What makes me tired is that we write letters, complain, organize petitions and we win some. But then the next week, the month or the next year, we're back at square one. It can be really tiring sometimes.

in October 2014, I was invited to attend a Meeting at CIRM in Marseille, the "Centre international de rencontres mathematiques", a conference center devoted to mathematics.

My first visit to the CIRM was as a Ph.D. student - I was single, no kids. I enjoyed my stay very much, the atmosphere for exchange and research, the beautiful surroundings. So I was looking forward for visiting the CIRM again.

However, this was not possible. My personal situation has since then changed: I am married, and we have an 11 year old son. My husband is a professor of mathematics as well, working in the same area. So in fact, I have to correct my statement: We were both invited by the organizers to be regular participants of this meeting. We therefore informed the organizers and the CIRM that we would like to bring our son. Of course, we would pay his expenses and organize a "baby sitter" for him, so that he would be occupied during the day.

Our son attended his first conference when he was 3 weeks old. Whenever possible, we leave him at home with suitable child care. But as most scientists, we do not have any relatives in the city where we were appointed professors, so it's not always possible. Our son has accompanied us to research stays all over Europe, South America and Asia. We're great at finding baby sitters wherever we go. We never had any problems, our son was welcome wherever we went. It's clear that we organized things always in such a way that he would not be a burden to organizers or other participants.

But at CIRM, all my past experience in organizing two professors and a kid was useless. I was informed sharp by the CIRM administration:

"For security reasons, children are not admitted at CIRM".

I first thought that this was a joke - our son is not dangerous, after all? But it became clear that this is dead serious. It is claimed that the insurance of CIRM "does not cover children", whatever it means. Now, being German, I have more insurances than I would ever need in my life: liability insurance, accident insurance... you name it. I offered to sign anything desired that I would cover all damages my son would cause. Nothing to do.

Instead, the CIRM administration started an outrageous game of shifting duties - weeks, almost months of e-mail exchanges followed. For example, we were told that we should try to find accomodation at the "Cite Universitaire" of the University of Marseille. Guess what they told us ? "We regret that our housing is not appropriate for families". More phone calls, more e-mails - to organizers, CIRM staff, CIRM director etc.

Finally, we gave up and cancelled our participation. And I sent a complaint to the "conseil scientifique de l'Institut National de maths du CNRS", who is part of the scientific committees supervising the CIRM. And, all of a sudden, we were offered to live at CIRM in a separate building. However, our son was still not allowed to enter the CIRM or to have breakfast and dinner there. But then we didn't want to go anymore.

Now, I understand that in the past, people may have abused of the CIRM facilities to have a nice holiday with their families - allegedly, I would think that these would have been male participants bringing their wife and children.

But our situation was different. Being both scientists in the same area, our only option for participating was to travel with our son. It is to be expected that this constellation will be even more common in the future, with more and more women in mathematics. Other situations can easily be imagined where there is just no alternative to bringing a child - a baby being breast-fed, an ill child, a single parent...

So, for me the current CIRM policy means effectively that I am being hindered to "practise" my job as scientist. And this is something that we, female mathematicians, should not accept. It is not a solution that perhaps, once in a while, one of us is successful at making enough ruckus to get an exceptional permission to bring a child - a Ph.D. student or less pushy person would not have succeeded. The policy itself NEEDS to be changed!!!

I am full professor now, I do not need to attend some singular event - if I'm not wanted, I don't go, period. But if I had never been allowed to bring my son anywhere - I would probably not be full professor today!

I firmly describe myself as being "francophile" - I attended a French Lycée in Munich, I have a French Baccalauréat C (high school degree) and even was hounored by a second price at the Concours Général des Lycées. I have some experience with French administration. Hence, this experience really makes me very sad.

I believe that French women mathematicians should urgently advocate a change in policy at CIRM. I would consider it bad style to do this as a foreigner - so, I hereby would like to encourage YOU, mathématiciennes françaises, to fight for working conditions that respect the situation of women in science! Our daily juggling of different responsibilities is already difficult, there is no need to make it harder by rules that are not up to date.

In the meantime, we were both invited to another CIRM meeting. We declined immediatly, it doesn't make sense to repeat the same story over again. Again, I would very much have liked to attend this "rencontre" and meet my colleagues. This shows that the problem will stay if nothing is being changed!

With my warmest regards from Marburg,