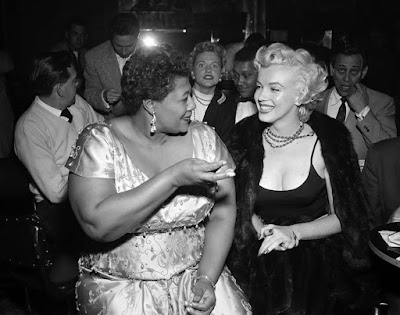 Yesterday Shankar asked me to say a few words about the history of LiCS (Logic in computer Science), which is completing 30 years now. (wow, the vastness of my old age still surprises me, when I'm not looking...)

Since he mentioned it after 3pm, and since the said few words were supposed to be pronounced at 5pm, I improvised.  kind of. I warned him that I'd like to point out again the lack of diversity in the LiCS community and that I'd like to show two slides: Orna Kupferman's main slide, pointing out the problems from  LiCS2013 (below) and Brigitte Pientka and all of us spreadsheet of invited speakers in TCS, still being compiled.

The bottomline for LiCS: 30 years, 130 invited LICS speakers, 12 female, less than 10%. This is after all the effort that the discussion in 2013 produced.

I ended up adding a joke or two and there was some discussion of the code of conduct that SIGLOG is trying to get  accepted for all of our conferences. The PDF is here. 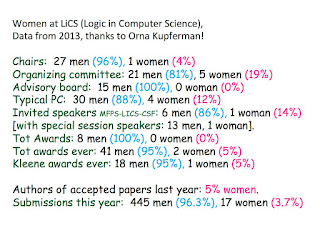 (apparently Ella Fitzgerald was having problems to find gigs, so Marilyn Monroe "convinced" a bar owner to book Ella, promising that she'd sit at the bar every night Ella sang. It was a success for both, they say, but it might be an internet folktale, who knows.)
Posted by Valeria at 5:12 PM