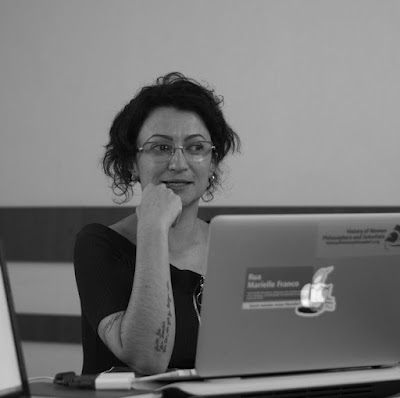 During the 19th Brazilian Logic Conference, held in João Pessoa, 6-10 May 2019, the Brazilian Logic Society (EBL in the Brazilian acronym) opened a space for discussions about the presence of women and the variety of challenges they face in  Logic, especially in Brazil.

Valeria de Paiva (who wrote briefly about the talk here), Elaine Pimentel, Claudia Nalon and I participated in a round table entitled “Women in Logic (in Brazil)”, in a room full of curious faces – mostly young researchers gladly open to what we had to say.

In the first few minutes I’ve talked about the context and the main motivations for the round table: the low presence of women in STEM and, in particular, in the field of logic, some barriers like the “inclusion by segregation” and, of course, the idea that we can act to change this unfortunate state of things. Since the audience was not composed solely by philosophers, I first gave some information about how only recently the Brazilian philosophical community awoke from its long dogmatic slumber regarding the women questions. My main point, though, was to present some ideas on how to break the “cycle of antilogic expectations” surrounding logic in the context of philosophy education in Brazil – involving High Schools and Undergraduate courses. Given some time limitations, my talk was divided into two parts, and Valeria started her participation by a video call.

Valeria started speaking about her personal experience, as a student and a researcher, and then presented the data gathered by Orna Kupferman on the presence of women in the field of Logic in Computer Science. After showing also some data collected by Claudia Bauzer and Celina Figueiredo on the decreasing presence of women in computer science, as well as the distribution of CNPq scholarships amongst women and men, Valeria presented some initiatives aiming to change this reality. As you readers know, Valeria heads of the project Women in Logic – a Workshop (the third edition was then about to happen in Canada), this blog and a Facebook Group, which she described with enthusiasm, especially regarding the positive consequences of the project. On the other hand,  the end of Valeria’s contribution contained a grain of (in my view healthy) skepticism, since she proposed a series of challenges we still need to face in order to create a gender-balanced environment for women in the field of logic. Her list included the proposition of a template for letters to be sent to organizing committees reminding them of inviting women keynote speakers, the need for an update on our lists of women in the field around the world, the “Wikipedia problem” (the fact that Wikipedia does not list many women logicians, mathematicians, and philosophers that we actually know about), the lack of collective memory about women in the field in general (I would like to add: we still don’t have a good history of women logicians!), the need  for articulation with similar groups in other fields and also the urgency of research collecting data about ourselves.

The third contribution to the round table was made by Elaine Pimentel, whose focus was the presence of women in Mathematics in Brazil and how to fight the disparities in the field. She started by presenting the data on the distribution of CNPq scholarships, and then presented the project “Girls in Mathematics”, which recently received a grant from CNPq. The main objective of the project is to stimulate girls from High Schools to know better and more mathematics, including the presence of women in its history and current practice, in order to increase their participation in the area. – We all hope that the project flourishes, Elaine! Before finishing her talk, Elaine also listed some initiatives by the mathematical Brazilian community, such as the Brazilian Meeting of Women Mathematicians and the platform (and related actions) Mathematics: feminine noun.

Claudia Nalon was the next to talk about women in Artificial Intelligence, especially Automated Deduction, the important junction to logic.

In order to conclude our presentation, I talked about the need to rethink our strategies for teaching logic as one of the main ways to show that women can do logic as well as men and, consequently,  have equal rights to living and working in the world of logic. I then made a very brief description of two experiences of “logical empowering” of High School female students (some former philosophy students of mine) realized in Porto Alegre, a couple of years ago and, finally, presented some questions we had elaborated together to start a conversation with the audience, which was great:

It is worth noticing that our proposal of a round table on the issue was immediately accepted by the President of the EBL, Cezar Mortari, a few months before the Conference. We were glad for this opportunity and we firmly believe in the continuity of this support in our future endeavours. 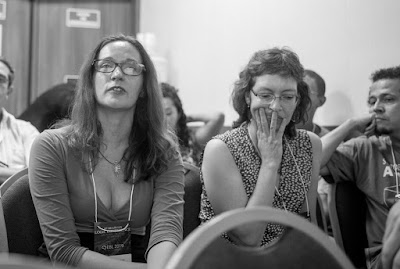