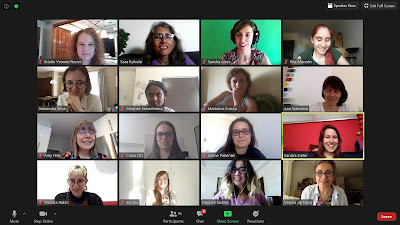 So the workshop Women in Logic is back to its original association with LiCS (Logic in Computer Science), which is happening in Rome this year.

Sandra Alves has a very nice website up and running,  and for the first time I realized that our other efforts are not connected online to the workshop. So in case you're just discovering our work, we have a collection of loosely connected initiatives:

1. We have a Facebook group called Women in Logic with 541 members now. (Since the atrocities in Burma, people are leaving Facebook which means we have to decide what to do.)

I need to write a summary of the achievements of the group, but we have been going on since (I believe) 2015. Prof. Rineke Verbrugge and I are administrators. The reason I believe so is that FB tells me I've posted a spreadsheet called

2. We have two spreadsheets that I think are helpful. The first called simply Women in Logic lists women working in all manners of Logic(computing, philosophical, mathematical), using tabs for continents. Everyone (from students to retirees) are expected to add themselves there, please. This spreadsheet was  started by Prof Catarina Dutilh Novaes

The second is an attempt to list (female or mostly not)  invited speakers in conferences in Theoretical Computer Science where logic plays a major role. This was done mostly by  Prof. Brigitte Pientka and her collaborators.

3. Since the Association for Symbolic Logic is the logician's professional association, Prof Johanna Franklin did a very thorough job of trying to discover the names and numbers of female Invited Speakers and organizers of special sessions. This was described in a series of blog posts, starting at "Gender  Ratio of Speakers at ASL Meetings".

4. We have a mailing list Women in Logic  women-in-logic@lists.rwth-aachen.de and a Slack channel, that you need to ask to join.

5.  Sara Uckelman reminded me: don't forget the Women in Logic twitter! https://twitter.com/WomenInLogic1. I am very thankful to Sara for doing this work!

The workshop Women in Logic is its 5th year and 2020 was the largest one so far with more than 90 people online, I believe.

Given that all of us organizers, plus Invited Speakers, PC members, talk presenters and reviewers, and many others not mentioned by name above only work on this kind of outreach whenever possible, I think we're accomplishing a lot!

More importantly, when in June 2020 there was a call for STEM to stop working and pay attention to its lack of inclusivity, it was very nice to have fellow logicians cite our work with women's rights as an example to be emulated.